The media is broken

in data gennaio 01, 2020
Ce n'è voluto di tempo, ma iniziano ad accorgersene: "An event is really two things. It’s the event itself and then it’s the process by which we make meaning of the event. [...]
When a whole country sees events through a similar lens, then you don’t have to think a lot about the process people use to make meaning. It’s similar across the land. But when people in different regions and subcultures have nonoverlapping lenses, the process by which people make sense of events is more important than the event itself.
For reasons I don’t understand, we’ve had an epistemic explosion over the past few decades. Different American regions and subcultures now see reality through nonoverlapping lenses.
[...] with some noble exceptions ... , we underreport on how meaning is made in different subcultures. You can’t make sense of reality without that. Often we throw up our hands: “Can’t these people see the facts?!?”" 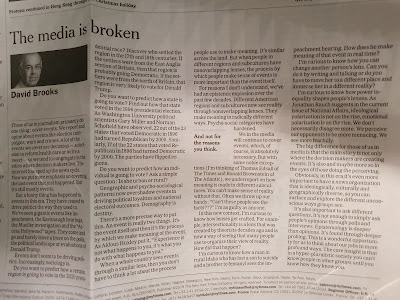